On Thursday, Aug. 15, 2013, more than 40 Vassar alums gathered at the Woolly Mammoth Theater at 641 D Street, NW for a special viewing of America All Better!!, presented by the infamous Second City team out of Chicago. The evening was filled with laughter, as the improv team expertly wove in and out of political themes with sketches that hit right at the heart of what life in D.C. is all about.

After the show, alums were welcomed by Woolly Mammoth Managing Director Jeff Herrmann ‘92, who provided a brief background on the theater, as well as a sneak peek into the list of upcoming performances. The group was also given the opportunity to meet and mingle with the Second City performers. 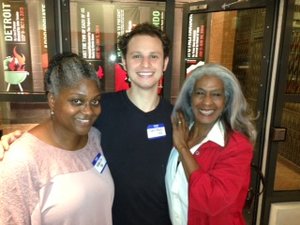 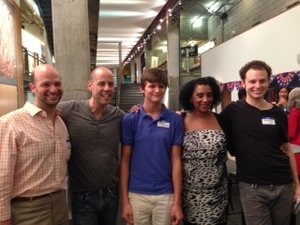 Woolly Mammoth is a national leader in developing and producing new plays. Woolly prides itself on producing work that is edgy, challenging, and thought-provoking, rightfully earning its title as “Washington’s most daring theatre company.” Woolly Mammoth has received more than 190 Helen Hayes Award nominations for its productions and 33 Helen Hayes Awards, including nine Charles MacArthur Awards for Outstanding New Play. The Outside Woolly program has been honored with the Washington Post Award for Outstanding Community Service, and Woolly Mammoth has twice received the Mayor’s Arts Award for Excellence. Learn more at www.woollymammoth.net.